How I became a disciple of Osho

From my earliest youth it always seemed to me that my ideas were out of step with pretty much everyone else around me. Yet I held firm to my own opinions, indeed I fought so strongly for the rightness of my views that I found it hard to make or keep real friends. In time I found more congenial company, especially at Oxford University, where free-thinking was more socially acceptable. And gradually I came to realise that being right is less important than enjoying the freedom to form and express my own ideas.
Yet there was a method to my vehemence: the scientific method. I held no views unless they could be supported empirically, and was ready to reverse my position as soon as I became aware of fresh evidence. I considered myself a thorough rationalist, ignoring authority and eschewing superstition - let the truth be known by its merits. Yes I had read a book on Zen Buddhism, and I had even been to a few meetings with a group of Sufi mystics, but this was all part of my quest to know all that could reasonably be known. In just the same spirit I had set myself to reading as much as I could of the world’s great literature, though my formal education had been scientific, in order to complete myself as a rounded and well-informed person. 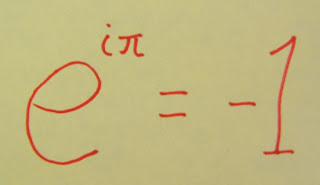 A few years after graduating I got together with some old friends from college. Another friend had been out of touch for some time, and now news had been received from him. Apparently he’d gone overland to India, which in those days was a common aspiration for hippie types like us, and there he’d met some guru. This struck me as rather exotic, it had never occurred to me that I might meet such people. Well, a book and a tape had been sent to one of these friends, but when I arrived they’d already listened to the entire tape, so they weren’t very keen to hear it again. Feeling a bit frustrated, I picked up the book, and in the front fly-leaf there was a photo of Osho…
So there’s this guy with long hair and beard, wearing a long white robe, and something about the photo is super-real – like he’s shining up out of the page at me. My mind suggests that the photo has been retouched, but I can’t imagine what could possibly produce such an effect. So I’m staring at this image, gob-smacked, and I try to point out to the others how remarkable it is, without much success, except that they eventually agree to listen again to a bit of the tape.
It was just a few sentences that I heard, considerably less than five minutes, but from the very beginning, as soon as I heard Osho’s voice – I couldn’t understand much of what he was saying so I guess the sound itself was the real trigger – another process was going on inside me while I was listening, and this parallel process was essentially completed during that time. Actually I don’t think there were any words involved but I’ll try to render it understandable as a stream of verbal thinking:
So I’m going to India. How soon can I go? I’ve got to give notice from my job, so that’s three months, and I’ll have to sell my place. Damn! It’ll have to be sold to my ex-wife, since she paid some of the loan, but she doesn’t have any money! So I’ll have to arrange a meeting with her and her parents, and I’ll just have to persuade them to buy it for her. Shit! What about my parents? They’re going to be really pissed off, but they’ll just have to accept my decision. And what about my girlfriend – she’s still at college? Well she can join me later, I can’t miss this opportunity. What else? I can give most of my stuff away, my books to A, my clothes to B and C, maybe I can sell my record collection to D, the rest of it I can just throw away, anything I can’t carry. So I’ll get a ticket for three months’ time, there’s a few friends I’d like to visit before I go, but, yeah it’s all doable… 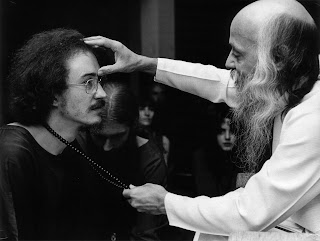 Before encountering the photo and the tape I suppose I was vaguely discontented with my life as it had been, but I wasn’t actively seeking anything, certainly not a Master! I had a job I enjoyed, and a girl I wanted to be with, and plenty of good close friends. It seems, however, that an existential crisis was bubbling under. Within a few moments the direction of my life had utterly changed. I was going to India to be at the feet of the Master, and I didn’t intend to ever return.
Sure enough, it all played out as “planned” and three months later I was sorting through the last few things just prior to my departure. I came across a leaflet with some of Osho’s words, and a photo. In a flash I realised how I had nearly come to Osho…
Some years earlier I had visited a new-agey exhibition, when such things really were new, and there I’d picked up a great many leaflets. When I got home I’d read through them all and, concluding that none of them was for me, I discarded them. All except one. I read it many times, and decided that this was something which was either completely beyond my experience and wholly remarkable, or it was such a good hoax that it was anyway worth following up. These people had a centre in London, and Wednesday night was open night. Every Wednesday I thought about going, for many weeks, but every Wednesday I was too timid. Eventually I buried the leaflet in a deep drawer, and the uncomfortable memory of my cowardice in my deep unconscious.
So he got me in the end. It didn’t feel at all like I made any kind of decision, more like he had his hook in me and was just reeling me in. This, then, is the story of how I became a disciple of Osho - but did I have to abandon my rational approach to life? Absolutely not! I remain as awkward as ever, for which some of my fellow disciples give me grief. I’m also overwhelmed and delighted to have found Osho, for which some old friends scorn me as a fool. Down through the years I’ve tried to integrate these two streams of my experience, and it’s become clear that there’s nothing to be done about it - I’m just stuck with this unusual take on reality. Hearing Something Which Is Not Said is an attempt to crystallize my own understanding, and also to share whatever can be shared with anybody else who may be interested.
Email ThisBlogThis!Share to TwitterShare to FacebookShare to Pinterest